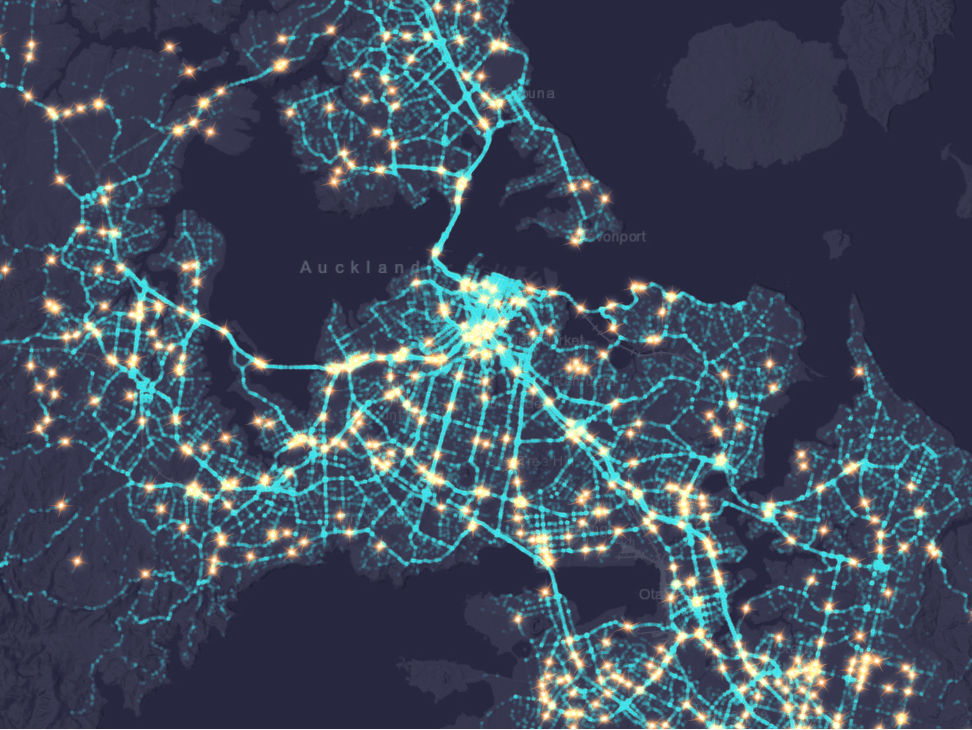 I recently had a project which required me to display a lot of point data with some familiar issues:

First things first, I had to get the 660,000+ data points into map from excel. Arc  makes this a simple process using the Excel to Table  and XY Table to Point tools.

Second, I needed to decide the “feel” I wanted from the final product. I was recently inspired by this awesome map using Taxi data in New York  and other maps using ESRI’s new Firefly style. My mind was set on creating something with a dark background and points that appeared luminescent. I went ahead and set my basemap to Canvas Dark and clicked through a couple of bright symbol colours before settling on blue.

With my place holder symbology selected I needed to deal with the next issue; data overlap. The data deals with traffic information, so I knew there would be points stacked (in particular at intersections). To check I clicked on a couple points along intersection; sure enough there were some areas where 30+ points were stacked. 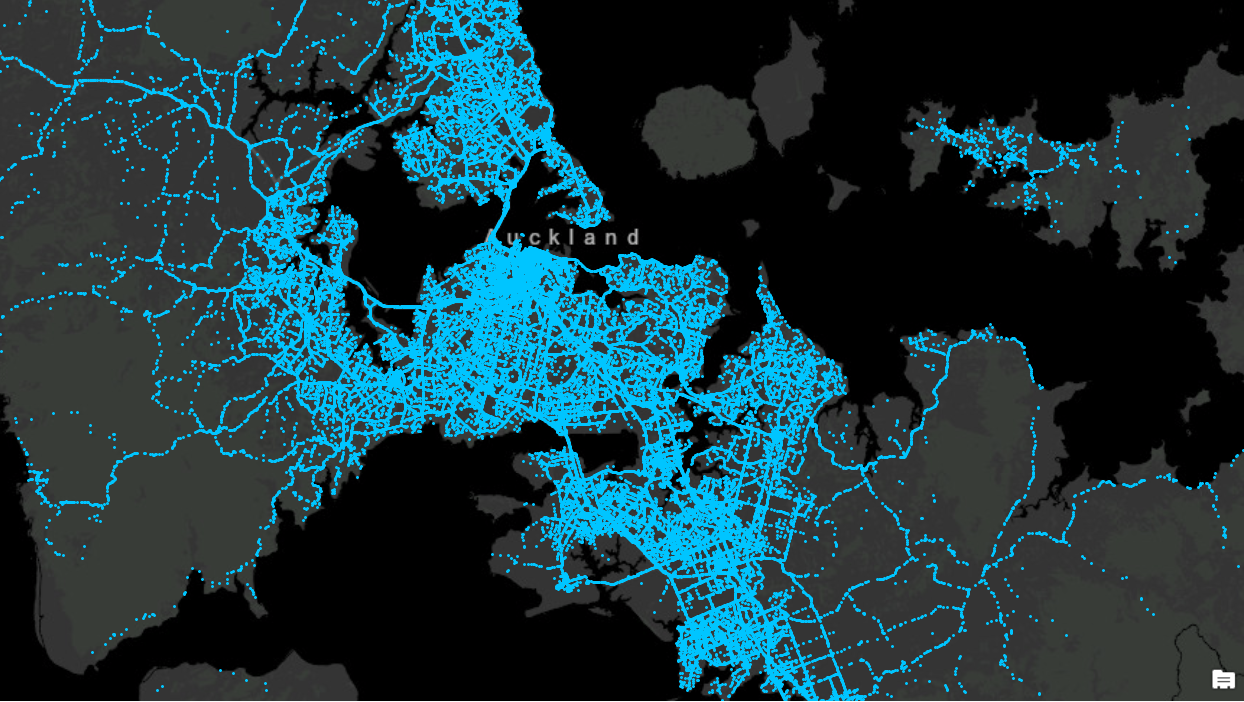 To overcome stacked points when displaying data, a couple of the most popular options are playing with the alpha (transparency) or jittering (scattering) the points. In Arc Pro, there are two quick ways to adjust transparency; however, only one will create the desired effect.  Adjusting the layers transparency in the Appearance tab will treat all points like a single feature, making the transparency uniform. You can see in the first image below how everything becomes muted at 65% transparent. Adjusting the symbols colour transparency will apply the affect to each symbol drawn on the map, making it so colour is more intense where points overlap. For this example, the point symbol colour is set at 90% transparency yet there are still some very intense areas of high overlap. 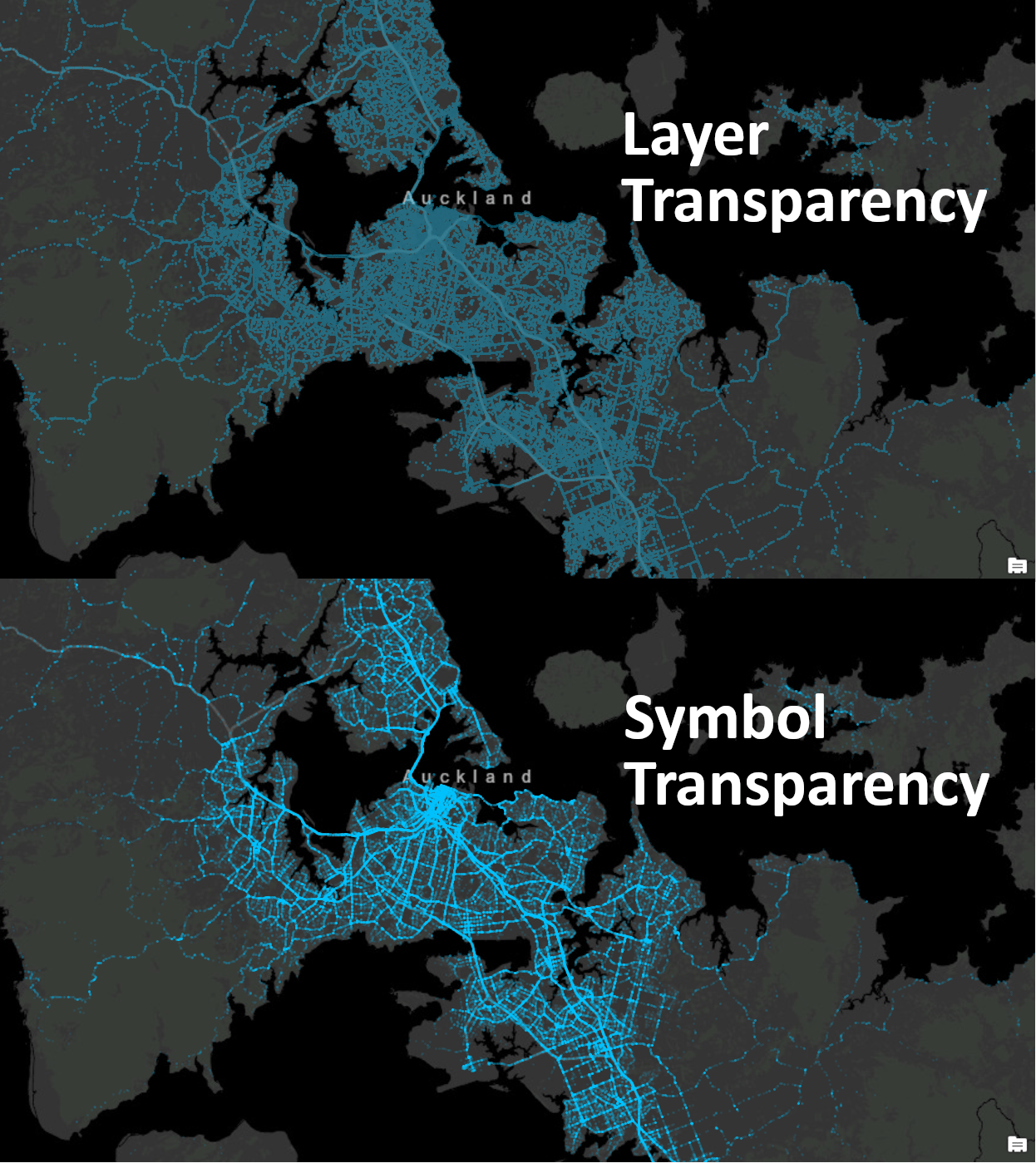 The second choice, to scatter points, isn’t always advised. Often transparency is enough. However, in circumstances where there are large amounts of data, and portraying concentration is more important than point accuracy, scattering can be very handy.

Arc Pro does have tools like Disperse Markers available to accomplish this, but they are not part of the standard package. This tool will also re-project the point data instead of offsetting the symbols. There is also the choice of using the symbols in labeling and tweaking weightings , though I still want points to somewhat overlap which could be difficult with the label method.

So, one quick and dirty fix involves Allowing symbol property connections and playing with randomness in Arcade language. Once the connection is set, scroll to the bottom and expand the offset distance panel. You’ll see the option for X Offset and Y Offset with the gdb symbol next to each . Click on the symbol for X Offset, to open the attribute mapping window: 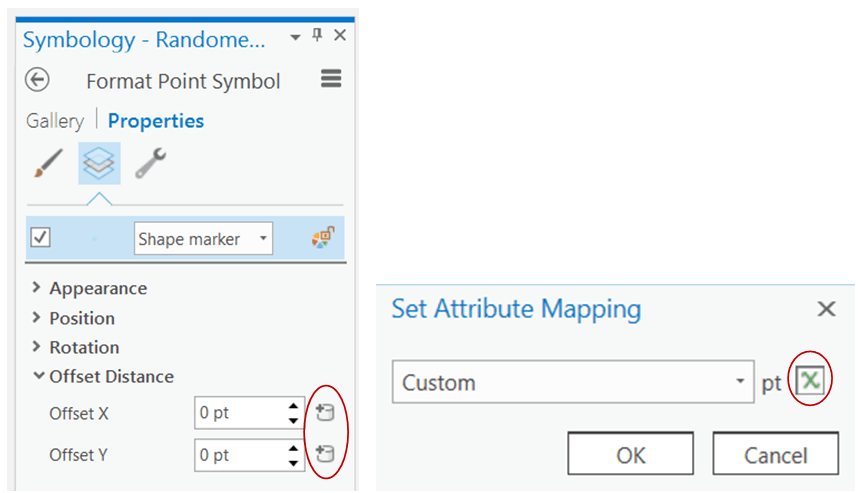 Click on the Set an expression button  and type in the code (random()-.5)*2 then repeat the steps for the Y Offset. 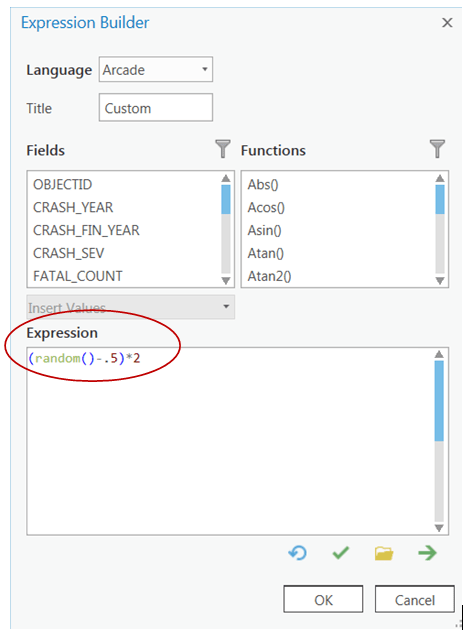 Depending on the scale of your display and size of your points, you may or may not notice the points shift. What has this formula accomplished? Random() will return a value between 0 and 1. If we leave it at that, all the points will shift random amounts to the North and East by up to 1 pt. The -0.5 is added to shift the minimum potential value to -0.5 and the maximum value to 0.5. Multiplying by 2 increases the range from -1 to 1. This means all points are now equally likely to shift up to 1 pt in any direction.

If the scatter isn’t enough for your data, simply increase the multiplier and see what happens. In the gif below, you can really start to differentiate the areas that have the most point overlap. For example, in the area below Epsom (left, centre) there are 3 intersections that look similar in size and colour intensity. But as the multiplier increases you can see that one maintains intensity while the other two become diffuse.

Note that a different randomization will occur every time the layer is drawn, so as you navigate or change extent the symbol placement will constantly change.  If you would like to keep the offset constant, or are working with a multi-part symbol, this issue can be worked around.

After testing several symbols, I decided to make a two part symbol that had a faded blue circle background with a darker blue star on top. The above method will no longer work, because the offset will randomize for each part of the symbol, potentially separating the two. To keep the same offset, I added two new fields to the data table, X_Offset and Y_Offset, and calculated the value for each with the earlier random formula of (random()-.5)*2).

To achieve more offset, repeat the attribute mapping steps above, but write the formulas feature$X_Offset*2 and feature$Y_Offset*2 for the X and Y offsets respectively. This will increase the maximum potential offset range from -2 to 2. Separating the multiplier into attribute mapping means you can play with the extent of offset, without having to recalculate the table fields each time. Remember that attribute mapping needs to be done for each part of a multi-part symbol.

As a last observation for Part 1; you may notice when the offset is low, the point scattering may take on a form that looks random or circular. However, as the amount of data, extent, and scatter increases, the areas with the most points will take on a distinctly square shape. 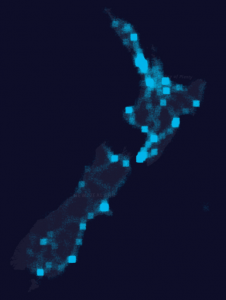 The process outlined was only the first part of my project. The blue points represent total events, are mostly to serve as the background effect for the final maps and animations. In later blogs I’ll review how to scatter points (or not) based on number of proximate points (without using the Near Tool), make a moonlit base layer, and finally how to manipulate Firefly symbology to make the stars twinkle in animations for points of interest.